I knew I needed to do something. Over the past couple of years I’d slipped into that freelance whirlwind where you say yestoo often and nonot often enough. I’d also noticed that this awful little tendency to over worry about what people thought of me had crept in. I also needed a clear head to work on the report associated with the scholarship that this blog was originally written for!
I first wrote about an experience I’d had while speaking at a conference on the Huffington Post  blog a couple of years ago. It came to the part of the event where I took questions and from deep in the audience came the one I always avoid, ‘What do you do for your own self-care?’ Boom! I tried the usual ‘Well, what do you do?’ but to no avail, so I fudged something about good sleep and walking and sat down knowing I hadn’t really answered the question.
Then this year over Christmas and New Year I felt like the past two years were catching up with me and I was exhausted. A couple of important things happened that meant that I’d fallen into #SelfCareJanuary. Firstly, I was accidentally vegan for 24 hours when the recipe for veggie tagine I was making one evening turned out not just to be vegetarian but actually vegan, to boot! – definite health brownie points there. The second thing was that my brother-in-law came to stay with us from Denmark. As we caught up we talked about lots of things: work, life, kids and eventually, and I’m not quite sure how or why, our conversation turned to bread making and just how therapeutic it can be.
Now, for me, self care has to have a pretty swift outcome. I know that’s probably shallow, but it’s also true. I can’t run for miles day after day waiting to feel the benefit. I’ve tried the gym and felt the same way about that. I can talk about other people’s artwork all day, but definitely lack the artistic prowess to create work myself, so that’s out. All in all, I thought that starting something and seeing…and eating…the fruits of my labour within 24 hours sounded like a good self care fit for me.
My brother-in-law offered to show me how to make a sourdough ‘starter’, the flour and water mixture that develops naturally to provide the yeast element in sourdough baking. Sounds simple, but I had to overcome the fact that having anything living AND growing in the kitchen made me feel a little bit sick. The responsibility of ‘feeding’ the starter and keeping it warm also filled me with dread.
All of that aside, I thought I’d give it a go and later that day Steven the Starter was born. Mixing the right amount of flour and water together in a jar, my very kind brother-in-law taught me how and when to feed the starter after he had left to return home. Most importantly he bought me a sourdough bible. This was such a lovely parting gift, although I think he probably did that so I wasn’t asking him questions every five minutes!
In the days that followed I had to keep Steven the baby starter alive and warm and fed. The pride I felt as those little bubbles of CO2 appeared! I can’t tell you the joy! By day 5 and Steven the baby starter was ready to grow up and we were ready to make dough! 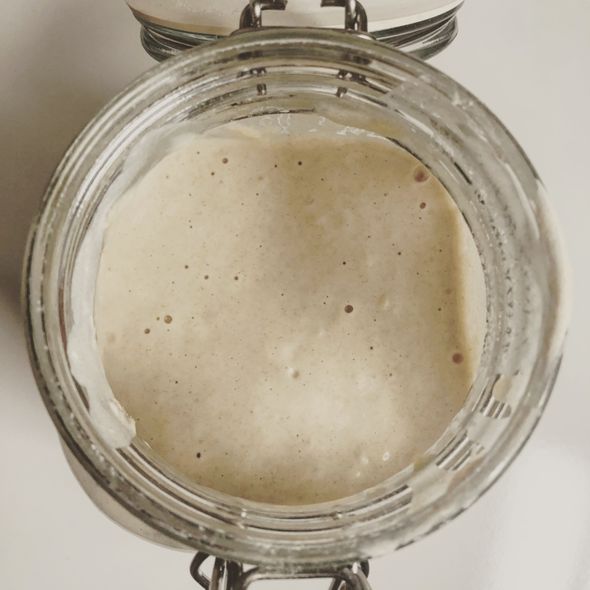 A SAMATA
Steven the Sourdough Starter
I went for a light rye loaf for my first bake. I actually had no idea if this was easy or difficult, but it was the first in the book that included the flour I had so I went for it. I knew the process would be important because, with only 4 ingredients, flour, water, salt – and Steven the Starter – I had to make the magic happen for those little holes to appear inside the finished loaf. I diligently followed the recipe to the letter, for fear of either killing Steven or feeling the disappointment of efforts wasted.
For the next 8 hours I mixed and weighed and kneaded and folded, turning each page of the sourdough book and comparing my dough with the one pictured in the baker’s bowl. Mine didn’t look exactly the same, but the fact that it was similar and it was starting to smell like real bread was miraculous in itself. 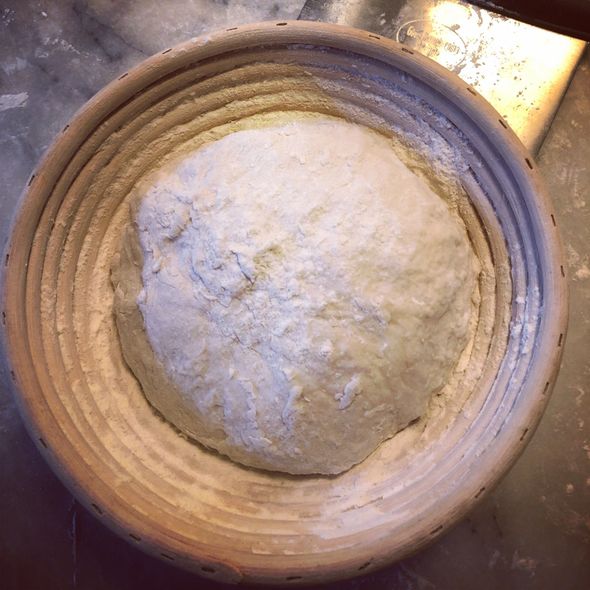 A SAMATA
First attempt at proving dough
Another remarkable thing was that while I was concentrating on bringing the ingredients together I didn’t have the head space to think or indeed worry about anything else. It was marvellous. Physically handling the flour and kneading the dough also meant that I couldn’t type or answer my phone or even reply to the messages that I could see and hear coming through. In one youtube video I watched it said that in order to get the best results from your kneading you should picture someone who you really dislike and let all your frustration out through the dough. Well, I did say I was going to follow the instructions to the letter…so, I did that part too! 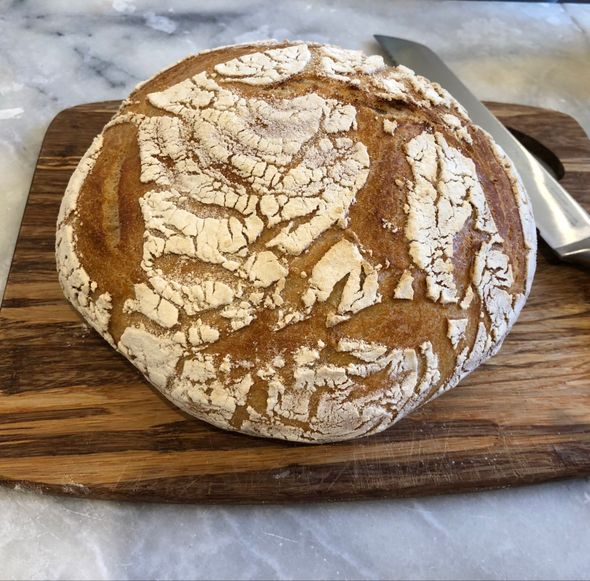 A SAMATA
First Sourdough loaf fresh from the oven
My first loaf cost around £75 to make. Everyone was so excited that I was doing something that was the closest they’d seen to domesticity that every time friends came to the house they brought more equipment and ingredients: small bowl, larger bowl, proving bowl, thermometer, special dough scrapers, sieve, books, ‘artisan’ flour, etc.
The bug has well and truly bitten and so far I’ve baked 9 loaves in 19 days.
…and as I type I have number 10 cold proving (I’m even using the sourdough jargon now) ready to bake tomorrow morning. 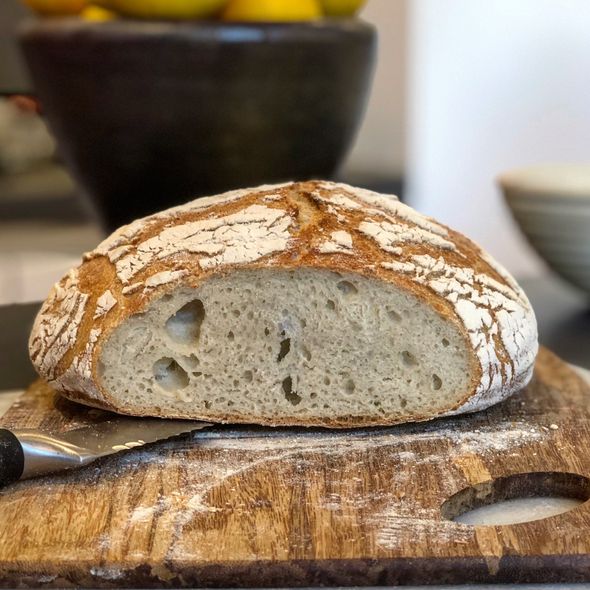 A SAMATA
Steven the Starter has worked his magic and the sourdough has holes
So, if you happen to be in the audience the next time I’m speaking feel absolutely free to ask the ‘What do you do for your own self-care?’ question, but be prepared for a long answer about warm proving, cold proving and how to get a good rise from rye.